Is It Summer Yet? 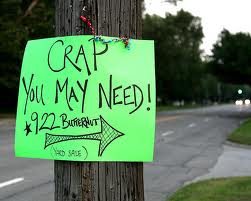 It’s January 9 and about zero degrees. No one wants to be out there. The holidays are over and I have no winter travel plans. It seemed like a good time to drag out some old things I wrote when the weather was kind and I could walk to the mailbox barefoot.

July 15, 2009 – The Garage Sale, Part 1
I try to avoid selling things to strangers out of my garage, but it seems that every five to ten years I need to do a great purge. Which doesn’t mean I’m not sending things to Goodwill on a regular basis. I think it’s a testament to the American ability to collect crap. Which isn’t to say my stuff is crap. I don’t want it anymore, but I’m sure people of discriminating taste will be breaking down the door. This is the kind of stuff I’ve uncovered to date:

I also have two wedding gowns which I’m sure the owners won’t part with. No, those dresses will hang upstairs for another 15 or 20 years being saved for their own daughters, who won’t want anything to do with them.

I’m planning the sale for mid-August because I need that much time to move things into the garage and to motivate my three daughters by whatever means possible (threats, bullying) to come and sort through their treasured keepsakes. Each of them has a pile in the basement with her name in chalk above it. These are adults. They’ve been adults for a long time. Two of them have their own homes with their own closets and basements. I told them last week they had to come over and take what they want, because anything left will be sold. Jill came over last night (with the kids, a mistake right there). Did she go through her stuff? No. She took several items off my sale pile though, which will now sit in her basement for the next five years, while the kids made off with some old toys and broke an ornament I might very well have gotten a buck for.

Gina is coming over on Saturday. She was the last one to live at home, so she has several boxes in the upstairs closet as well as that pile in the basement. And Jessica insists that she has nothing to sell (20-year-old skis? an end table with half a top?) and no storage room at her apartment. So you see, this is where the threats and bullying come in.

If anyone needs a prom dress, I probably have the shoes to match.
Stay tuned for The Garage Sale, Part 2

This entry was posted in The Not Dead Estate Sale. Bookmark the permalink.

5 Responses to Is It Summer Yet?