Has It Been Four Years Already?

It’s true. I will be glued to the set watching things I have no interest in at any other time. Javelin throwing. Sculling. The 200-meter backstroke. Of course, some events are too boring to watch under any circumstances – speed walking comes to mind – but for the most part I’m enthralled.

There always seems to be some drama surrounding the Olympics too. This year it’s been one thing after another for the Brits. People were worried the venues wouldn’t be finished in time. They had to call in the military when the security firm they hired couldn’t cut the mustard. Several of the city’s main routes have been closed to everyone except athletes and visitors, to the disgust of Londoners just trying to get to and from work. And yesterday, someone who wasn’t paying attention put up pictures of North Korean soccer players next to a South Korean flag, prompting a one-hour delay in a preliminary match and ruffling Communist feathers everywhere.

I like the British. They tend to be self-aware and inclined to say what they think. Upon seeing the Olympic flame arrive in London this week, one man commented, “Oh Lord, let’s just get the bloody thing started.” On the other hand, at least one Englishwoman predicts a change in the mood once the games begin, with people “behaving in ways we wouldn’t normally behave – waving flags and shouting and cheering and indulging in other wildly disinhibited acts, such as maybe even talking to strangers.”

Well, I for one will be watching, even though I’m sure something will happen to tear me away at the most inopportune moment. It wouldn’t surprise me if that baby decided to be born right in the middle of rhythmic gymnastics. 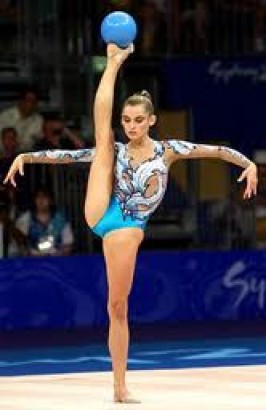 I WISH I COULD DO THAT.

3 Responses to Has It Been Four Years Already?