Jessica and John decided to get married. And since no one could think of a reason why they shouldn’t, here we go.

My family is a lot like a sitcom. It just takes something like a wedding to make it obvious. Daughter Jessica didn’t want anyone to know she was engaged until she announced it on her birthday in June. So of course, within the week, half the family did know. Then they had to act like they didn’t know.

She swung into full wedding mode, with John and I carried along in the undertow. Because a wedding has a life of its own, you know. Like the tide, once it’s barreling in, all you can do is keep swimming.

Meanwhile, the big announcement was still out on the horizon. Then John thought, No, things aren’t nutty enough. I think I’ll surprise Jessica with a pre-announcement announcement party. And because no one had told him he was marrying into a sitcom family, this seemed doable to him.

Thus began the maneuvering to bring six kids, a cake, a jacket, a ring, twelve yellow roses, and signs spelling out WILL YOU MARRY ME JESSICA? to Stillwater on Memorial Day weekend.

There was a script. Christian was supposed to hand John the sports jacket, Grace the flowers, and Maria the ring. Except, being a nine-year-old boy, Christian was opposed to being part of the proceedings in any way. We kept moving. The six nieces and nephews were designated to hold up the six homemade signs, with the question mark going to Lee, who will be two in July and is apt to balk at any request unusual or not. We figured it wouldn’t much matter if the punctuation fell off. 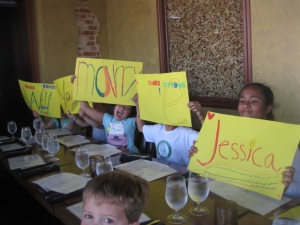 On Saturday morning, Jessica and John started off on a tandem bike for the 36-mile ride to Stillwater. Because that’s the kind of thing they do. By 3:30 most of the welcoming party had gathered at an outdoor restaurant on the river, where we plied the kids with food and high-sugar-content beverages to keep them from accosting the other patrons. By 5:30 we were on our way up the hill to another restaurant for the big moment. They put us in a small room with a door, which was smart. Then we waited. Gina made the kids do a practice run. Christian reluctantly accepted his fate. Grace complained that the thorns were poking her fingers. Maria was resigned as only a 13-year-old can be. Cosette commandeered my camera. Bret Jr. sshh’d everyone. Lee refused to leave his mother’s lap. I had another glass of wine.

At 6:30 Jessica and John came in and… everything was perfect. Well, a couple of signs were upside down, but it didn’t matter much. Jessica was verklempt. John was happy. Everyone else was exhausted.

On to The Little Chapel in the Woods!

View all posts by Judy

4 thoughts on “The Engagement”