Well, she never really existed, did she. But talk about your BFLs (big fat lies, I think I just made that up). For five years Miley Cyrus, aka Hannah, was the idol of just about every pre-preteen girl in America. I know my oldest granddaughter watched many an episode of the hit TV show and did all she could to help support the franchise. Now if a kid asks, “What happened to Hannah Montana?” her mother says, “Oh, I’m so sorry, dear. Hannah Montana is dead.”

Like most Disney Channel offerings, the show’s premise was always a stretch. Miley Cyrus played all-American teen Miley Stewart, who transformed into her alter-ego, rock superstar Hannah Montana, simply by donning a blonde wig and cooler clothes. Instantly, she was unrecognizable. No one ever caught on! It was Clark Kent and his glasses all over again.

Today the re-imaged Cyrus not only bears no resemblance to the character she once played, she was recently voted “Worst Celebrity Role Model for Kids” in a Yahoo Parenting poll. I guess I can understand why the role of Hannah might have become stifling after a while. But why go so quickly from preteen idol to shock queen slut of the Internet?

Which is not to say Cyrus isn’t talented. She is. And she certainly isn’t the first Disney star to fall off the Fantasyland castle (think Britney Spears or Lindsay Lohan). Her determination to ditch the character that made her famous, however, makes the others look like amateurs.

In an interview for next month’s issue of Marie Claire magazine, Cyrus says her years of playing Hannah may have given her “body dysmorphia.” According to MayoClinic.org, this is a psychological disorder in which “you intensely obsess over your appearance and body image, often for many hours a day.” I get that. For sure the character she played was almost anorexically thin. (She was a pop star after all.) And if body dysmorphia is a battle Cyrus fought and won, good for her. I’m just not convinced that’s what started her down the road to twerking on live TV and swinging naked from construction equipment.

No doubt Cyrus would say she never asked to be a role model in the first place. And I have to admit, as athletes can only be athletes, we can’t really expect entertainers to be more than just that, entertainers. We all know the real role models should be parents or grandparents or people who spend their time doing good deeds and don’t go around blabbing about it.

And who can blame her for wanting to make some money off her fame? God knows Disney made enough. Then again, who would Miley Cyrus be if it weren’t for poor deceased Hannah? Not a 22-year-old making over $50 million a year, I’m thinking.

Oh, I know I’m on the cusp of being a COP (clueless old person). But remember back in the sixties, when we had that big liberation thing? Women were good and fed up with being treated like sex objects and weren’t afraid of being called feminists. Now entertainers like Cyrus – along with the many manifestations of “girls gone wild” online – could make you think that battle was never fought. I would just like to know, what the hell happened? 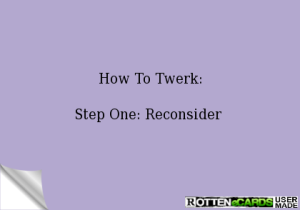 Created by: Kimmy B

Subscribe to this blog under Email Subscription in the right column.

8 Responses to Hannah Montana Is Dead