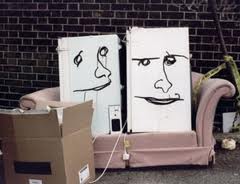 My oldest daughter, Jessica, and her Committed Other (let’s call him John, since his name is John) bought a house. They had to, as the one-bedroom apartment she’s lived in for the last twelve years could no longer contain them. The new house has four bedrooms. They need four bedrooms. They moved last weekend.

Let’s face it: no one wants to help anyone move. That’s why God made family groups. The attack on Jessica’s apartment was many-pronged – a gathering of reluctant souls from all points of the compass – and it still wasn’t enough humanpower to get it done in a day.

The thing is, these people are too old. Jessica and John, that is. They are mature adults, each of whom has been accumulating consumer goods for decades. Jessica’s things have been overflowing into my basement since college. John’s belongings were spread out from here to Iowa, locked in storage or trying the patience of various relatives, from the time he sold his previous house.

I was thrilled when I found out Jessica was getting her own basement. Two carloads and then some, and I still haven’t managed to shift everything from Here to There. I will though. How long can a mother hold onto the treasured crap her kids can’t live without but will ignore for years? I still have two wedding gowns upstairs. The owners each have three kids of their own now. What am I, the Smithsonian?

The new homeowners’ new living room currently has about 30 boxes waiting to be unpacked. Jessica told me she moved a full-size box spring and mattress out to the garage by herself today, something I did not expect to witness in my lifetime. The new garage is full too, of course, and I think they are finally considering the benefits of purging. Throw it out, give it away, drop it off a bridge at midnight.

I bring it up because it seems to me that the problem of disowning our belongings is reaching crisis proportions. People will do almost anything to get rid of stuff they can’t use and don’t want to pay to have hauled away. Leave it on the curb and hope someone desperate will drive by and take it. “Donate” it to the Goodwill after hours. We should stop buying stuff, yes we should. We won’t though. I’d bet a box spring and mattress on that. 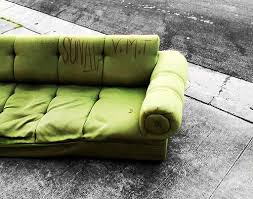 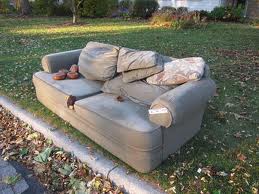 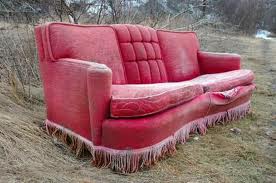