Because He’s Five, That’s Why

My grandson Bret Jr. turned five yesterday. He marked the occasion by giving himself a Minion haircut (see photo), in preparation for his Minion-themed birthday party. And because, he says, it looks cool. Well, you can see the amazing resemblance… 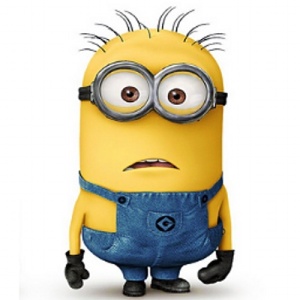 Come to think of it, my own children were about five when they decided to try their hand at cosmetology, although I don’t recall that they started at the top of their heads, so maybe that’s a boy thing.

He got a fair share of Minion-related birthday presents, of course, and one friend gave him a book on raising chickens, along with a plastic chicken feeder and watering dish. He and his sister are desperate to raise chickens in their backyard. Well, mostly his sister, but he is one of her biggest supporters. You might think they live out on a country road somewhere, but they actually live in a heavily populated suburb of St. Paul. Nevertheless, their father is going to check with the city to see how many chickens they can have, while their mother, who suffers from severe ornithophobia, says she is willing to fry up the eggs. Because that’s how they are. This simply means that I will have to spend a portion of every visit outside looking at the chickens and exclaiming over the chickens and trying to avoid being pecked.

Anyway, Bret. A happy, smart, funny little boy who still assumes his seven-year-old sister knows more than I do about most things but doesn’t follow her around as blindly as he did two or three years ago. He is into action heroes, which is why I’ve had a little 5-inch man lying on the box next to my back door for a couple of months with instructions not to let anyone move him. I don’t.

Yes, birthday season is upon us. I have two more grandkid birthdays coming up in about a week. It wears me out some, but it is seldom boring.

3 Responses to Because He’s Five, That’s Why