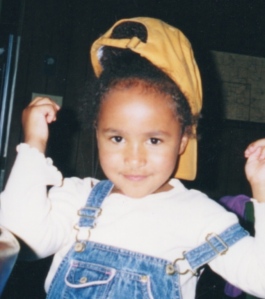 My oldest granddaughter, Maria, turned 15 today. I know. How is such a thing even possible? The very word, grandCHILD, proclaims the absurdity of it.

To mark this unprecedented event, the almost-a-woman had a slumber party at my house last night, as people that age are wont to do, simply because I have a big empty bedroom and almost limitless tolerance. Her brother had a sleepover here about a week ago. You might think five 10- and 11-year-od boys unparalleled in their ability to create mayhem, but I’d have to say, for sheer volume and exuberance, six teenage girls put five preteen boys to shame. 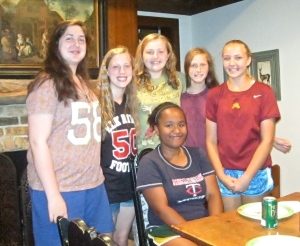 SURE, THEY LOOK TAME.

The girls played some crazy games they made up and listened to music I never heard before. About the time they started concocting things in the kitchen with giant marshmallows and Hershey bars, I went to bed. There are times when it’s a kind of blessing to be semi-deaf. I slept quite soundly until 7 am, unlike Maria’s mother, who needed a good nap today.

When I think of my own teenage slumber parties, I recall a rather controlled group of almost-women, although I realize now that can’t possibly have been the case. It seems to me there was a lot of hair-arranging and angst involved. Someone’s bra may have ended up in the freezer, but other than that, no 1960s mother would have let us near the family kitchen.

PRACTICING OUR DANCE MOVES. OR SOMETHING.

Anyway, it seems appropriate at this time to drag out one of my favorite Maria stories…

“One day when the family was over, I didn’t think much of it when I saw 8-year-old Maria cutting up a grapefruit in the kitchen. After everyone left, I sat down to read for awhile, then headed for bed. I went upstairs, turned on the bedroom light, and saw a chunk of pink grapefruit stuck on the wall with a hat pin. Which probably wouldn’t have been a big deal except that I had just been reading The Killing Floor by Lee Child, which is exactly what it sounds like, and at first glance the piece of grapefruit looked remarkably like a piece of human flesh to me and it took about ten minutes for the hysteria to subside. I ask you, what would possess a child to pin grapefruit to her grandmother’s bedroom wall? Truly, it is troubling to me.”

I love that story. And surprisingly, Maria has not turned into someone who can’t be trusted with sharp objects. She is in fact a sweet, soft-spoken, thoughtful young woman. This is a good thing, so now I will just shut up about it.

This entry was posted in Maria. Bookmark the permalink.

1 Response to Fifteen and Counting